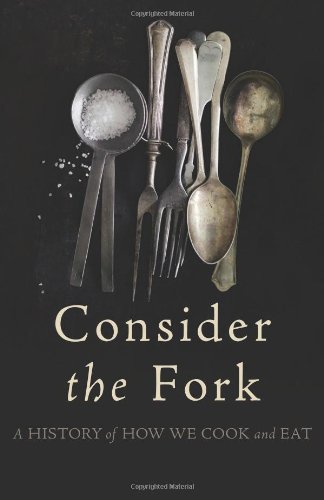 The folks over at the TheAtlantic.com have a great interview with Bee Wilson about her new book “Consider the Fork: A History of How We Cook and Eat

They ask if somehow the introduction of eating utensils like proper flatware introduced problems rather than solutions to our teeth. A part of her response:

Until around 250 years ago in the West, archaeological evidence suggests that most human beings had an edge-to-edge bite, similar to apes. In other words, our teeth were aligned liked a guillotine, with the top layer clashing against the bottom layer. Then, quite suddenly, this alignment of the jaw changed: We developed an overbite, which is still normal today. The top layer of teeth fits over the bottom layer like a lid on a box.

What changed 250 years ago was the adoption of the knife and fork, which meant that we were cutting chewy food into small morsels before eating it. Previously, when eating something chewy such as meat, crusty bread or hard cheese, it would have been clamped between the jaws, then sliced with a knife or ripped with a hand — a style of eating Professor Brace has called “stuff-and-cut.

Read the full interview at the TheAtlantic.com or check out her book from Amazon.