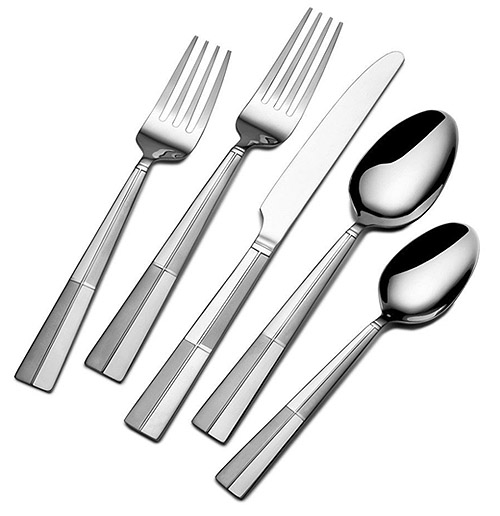 The geometry design on these handles reminds me a little of Mondrian’s work, lacking the color of course. This set of cutlery by International Silver is called “Arabesque Frost” and is a 20 piece  set that consists of salad fork, fork, knife, spoon and teaspoon. It’s made of dishwasher safe 18/0 stainless steel.

This cutlery set isn’t made with a lot of metal so it feels lighter in the hand and might not stand up to abuse very well. But at the price and for the look it’s perfectly suited for the dining room table. 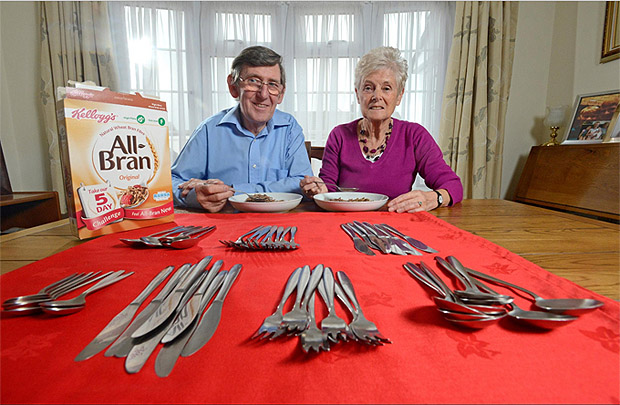 Sorry if the song “Let It Go” is stuck in your head now for even mentioning Disney’s movie hit “Frozen”. But if you buy your little one that is singing it constantly this cutlery set of Anna and Elsa then you might get some silence while they are eating 🙂

This set of fork and spoon featuring the two female leads from “Frozen” is made of stainless steel and plastic that is BPA free. Each piece is about 5 3/4 inches long.

Be warned, they are not dishwasher safe! Please hand wash or else the images on the handle will come off.

We are really big fans of Everyday Carry Cutlery products here at the Cutlery Review. This product caught our eye more than 6 months ago, but it was not in full production so the price and availability were undesirable.

But now it’s easy to buy and for a great price. The Spork & Knife Swivel Set is designed by Wei Young. Made from Tritan which is a dishwasher safe and BPA free plastic. It is a folding set of cutlery that includes a spork (actually a spoon on one end and fork on the other) & knife on metal carabiner.

A great stocking stuffer for the student or office worker who regularly finds themselves without cutlery when they really need it.