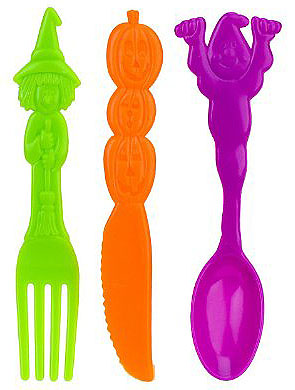 Let’s think about this for a second, who would buy cutlery that was Halloween themed that wasn’t disposable? Ozzy Osborne? The Munsters? Hard to say, but pretty much all the flatware we look at when it comes to Halloween parties is plastic and disposable. But that doesn’t keep your kids from washing it off to play with it later. These would be good a surprise in your children’s lunches during Halloween as well.

This set from Party America is called “Plastic Fun Shaped Halloween Flatware- Halloween Party” which pretty much explains everything about it 🙂 The set  includes four witch forks, four ghost spoons and four pumpkin knives. The cutlery pieces are six inches in length which makes it the right size for both children and adults.